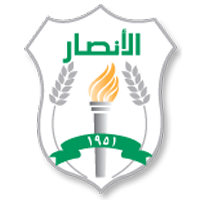 Al-Ansar Sporting Club (Arabic: نادي الأنصار الرياضي‎‎) is a Lebanese association football club based in Beirut. Formed in 1951. They went on to set a world record by winning the league 11 seasons in a row. They have won more Lebanese FA Cup and Lebanese Premier League titles than any other club.